Do you know how many bucks you have ? - financial literacy for teenagers and why its important ! 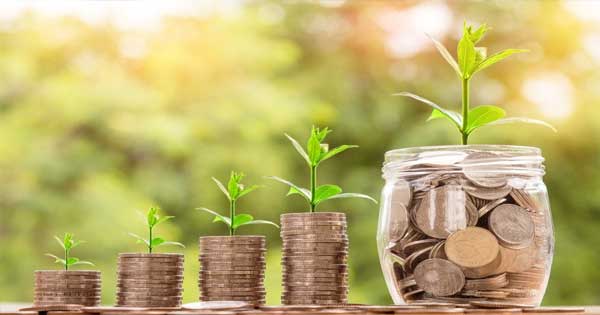 With India having more than 50% of its population below the age of 25 , its set to become one of  the youngest country with 64 % of its population in the working age group by 2021.  The rising job opportunities and with technology changing every day the future Careers are going to evolve with lot of changes and trends with multi skills and diversed career profiles. But one thing that remains stagnant and important is the role of money ! How good are the youth to handle their finances ? Do they have the proper financial awareness ? Sadly, money is not taught in schools. Schools focus on scholastic and professional skills, but not on financial skills. This explains why smart bankers, doctors, and accountants who earned excellent grades may struggle financially all their lives. And  one of the reasons the rich get richer , the poor get poorer , and the middle class struggles in debt is that the subject of money is taught at home , not in school. Most of us learn about money from ou
Post a Comment
Read more

Life skills - skills that take a back seat ! 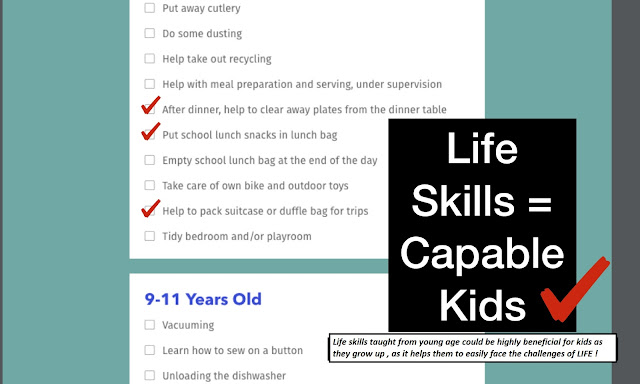 Students should learn life skill naturally through every day interactions and problem solving. The problem is that as students become busier with athletics, music lessons, and other extracurricular activities, life skills tend to take a back seat. Parents extend their roles as caregivers to support their children’s increasing interests, often cooking, cleaning and scheduling their life far longer than appropriate. As a result, students sometimes graduate high school without an awareness of what it takes to function on their own. What are Life Skills?   Life skills are behaviors that enable individuals to adapt and deal effectively with the demands and challenges of life. There are many such skills, but core life skills include the ability to:    (The Ten core Life Skills as laid down by WHO are:) Self-awareness Empathy  Criticalthinking Creative thinking Decision making Problem Solving Effective communication Interpersonal relationship Coping with stress Coping wi
Post a Comment
Read more

"If opportunity doesn’t knock, build a door” – Milton Berle Tempting enough, right? But can you really follow this philosophy? With the job market continually changing, it can be hard to know just what you need to begin a genuinely fulfilling and lucrative career. To build the proverbial door for yourself, you need to know where to start. A BA in Business or a Master of Business Administration (MBA) is the logical first step for anyone contemplating a career in business.This is not without a reason as the salary potential for graduates holding an MBA degree speaks for itself. If you are wondering what’s next: How do I distinguish myself from other business graduates? The key is in being the type of employee that companies want to hire, retain, and promote. To do this, you need to have a list of skills in order to stand out from the competition. Prospective employers have a preferred set of skills needed for business graduates that they look for when hiring. Known as “soft skills,”
Post a Comment
Read more

COVID19  has impacted our lives in a way no one has ever thought about .It has affected the way we think our lives are, our jobs, our lifestyle, our priorities, and most drastically the way our Education methods are. Corona virus-related disruption has give educators time to rethink the sector.Technology has stepped into the breach, and will continue to play a key role in educating future generations.In a world where knowledge is a mouse-click away, the role of the educator must change too.Amidst this distress it's important to focus on the changes that will happen,especially over the trend of Online teaching. This unusual period of time has pushed us to look into other efficient ways of learning,and it's effectiveness is explored.In the days to come by, online teaching will find its way slowly over the traditional teaching methods . E-learning courses have become hugely popular and convenient than face to face traditional courses. The times like these pave ways for unexplored
Post a Comment
Read more

Freelancing is the Next Big thing !

Are you tired of waking up everyday, sitting in traffic, and listening to an unappreciative boss screaming at you, or putting you down and saying that you aren’t doing enough. Do you also have a set of skills that are unique and could be used to make money on your own? If you can answer yes to both of those questions, then congratulations. You may be ready to begin thinking about embarking on the exciting and fulfilling freelancer journey. The freelance community is certainly growing. Statista a business data platform, predicts that by 2028 that number will increase to over 86 million. What Is Freelancing?  A freelancer, or independent contractor, is a self-employed individual who doesn’t have to commit to a single, long-term employer. Instead, they work independently for several different companies or clients. Freelancers typically charge by the hour or day and are not required to register as a business if they operate under their own name. Whether you’ve recently been laid-off
Post a Comment
Read more 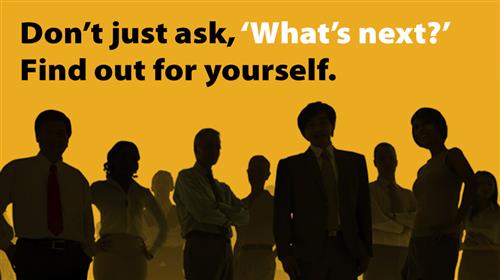 When you are a teenager, you have a very limited view of the responsibilities involved in some careers. If you have wondered what a person in a particular profession does, job shadowing can be a fantastic opportunity.  Job shadowing  allows students to take an up-close look at what a "real job" is like  and how the skills they learn in school can be put into action in the workplace. Job shadowing for high school students is especially helpful because  knowing which jobs you enjoy can help you decide on a course/stream selection  when you begin applying to colleges and also helps them  explore the job in a risk-free way  before they choose a major and begin to take college classes rather than wait until after you’ve graduated college to learn that you don’t like any of the careers your graduation prepared you for. It’s much better to learn which jobs you like and dislike before you choose it ! So what’s Job shadowing? Job shadowing is an experience  where
2 comments
Read more

Cool Jobs in Science and Biotech 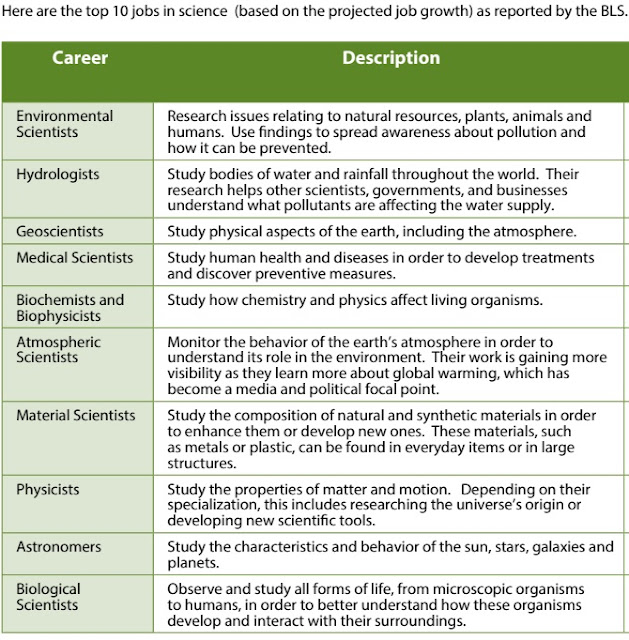 Cool Jobs in Science and Biotech If you are an aspiring scientist, consider the possibilities of a successful career in a growing industry. According to the Bureau of Labor Statistics (BLS), the number of science-related jobs will increase at a rate faster than the national average between now and 2016. Environmental scientists, hydrologists, and geo-scientists will experience the fastest growth. For most careers in science, you need at least a Bachelor’s degree, but an increasing number are asking for a Master’s or a Doctorate. Many of these careers come with attractive salaries that range on the average from $58,000 to $99,000, with the highest earners making six figures. One thing’s for sure, if you’re interested in these careers, you’d better take lots of math and science courses.The below list are for Science and Math Geeks.
Post a Comment
Read more
More posts